We made books in spanish class that we are going to send to Nicaragua. First we started off with making a quick overall script that we wanted to follow and then after that we came up with a more detailed story of what we originally planned. Book is about a seahorse who wants to help everyone she sees. The lesson of our story is that no matter how busy you are you always have the time to help people. Not just helping people that are hurt but also standing up to bullies as well. I hope that the children of Nicaragua learn new dialect along with learning the lesson that we were trying to get across. But I mainly just hope that they like the overall pictures and concept of the book.

Dia de los muertos was originated in Mexico after the spaniard were looking for spices. The spaniard tried to go to Asia but ended up in America. When they got here they meet some new people, they meet the Native Americans. Most of the Natives died because they were not used to all of the things that the Spaniards were. The spaniard tried to teach the natives about about Catholicism, but the Natives already had a religion and a part of their religion was a holiday called dia de los muertos. The spaniards and the natives had kids and when they went back to Mexico they started a new day incorporating Native American and Spanish traditions. This celebration is celebrated on the 1st and 2nd of November. Some things that's are included in these days of celebration are altars/ofrendas. Alters are used to honor the loved ones that have passed, Some things that are included on an altar are candles, flowers, salt, bread, pictures, water and sugar skulls. Candles for lighting a pathway for your loved ones spirit to come back, flowers to also lead the spirit back, bread to replenish their hunger same for water, and pictures to remember them.

For dia de los muertos I choose to do my grandpa. His name was vern and he passed away about two years ago. I chose to do my project on him because we were very close, my entire would always worked on the farm with him and it was like a very special thing. The process of making the altar was cool because I got to look over what things he liked and to celebrate those things again. Like the pecans, the pecans symbolize our family going out when the leaves are falling and picking up the pecans, putting them in a bucket and seeing who has more. A little friendly competition. He only had 5 pieces of clothing 2 pairs of work pants 2 flannels and 1 “nice shirt.” I put the flannels on the altar because it represents his personally just like the rest of our family. The one thing that I really wanted to put on the altar was wild flower. Vern died in a field of wildflowers on his last backpacking trip, and that was very important because he died doing the thing he loved.The cross on top of the altar was a cross our friend made. We were going to hike up and put it where he died but we never got the chance. A traditional things that were on his altar were a sugar skull, which we decorated in class.

I really enjoyed this project because I felt like could really connect and look back on my grandpa. I felt really special because we learned about the personal detail that we may have never learned before. I felt like this project was worthwhile because we got to learn about a new tradition and event that other cultures do. I really enjoyed making the little details for our altars like decorating the sugar sculls and making the paper flowers/marigolds. 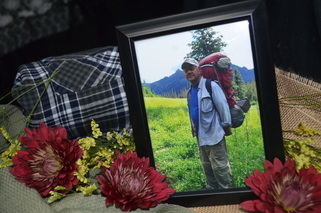 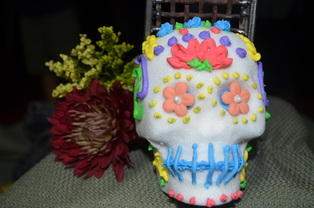